Good evening all, I am new to the group and am trying sort out a couple of issues with an 1999 3200GT; so far I have made some progress though still have some way to go. I think the head gasket has blown on the nearside bank of cylinders. its running really rough and will not rev above 2700 RPM;; the coolant system pressurises far too quickly and its loosing coolant. I carried out a compression test and the offside bank are all around 115/120 psi whereas the nearside bank are 90/95 psi. I have replaced the pedal position switch with one from Davey and David Askew has sorted out the TB for me, he also refurbed the rear shocks too, but clearly that's completely unrelated.
My questions are: Has anyone else experienced a blown head gasket and if so what were the symptoms? How difficult are they to change? Is it worth changing just the blown gasket and will the head need skimming? can anyone point me in the direction of a workshop manual?
Any assistance and or info will be greatly appreciated, there is no substitute for experience and I have a lot to learn about these motors so value your experience and knowledge.
Regards, Mark

I have not had the problem but your investigations do seem to point at the head gasket. Some early models did suffer problem and Maserati did update the gasket early on. I read an article on the Emblem web site where they changed the head gaskets and they took the engine out to do the job. Someone on the forum has changed them in situ but the difficult part is getting the exhaust manifold and turbo off as it’s very tight in there. If you take the engine out you can all the belts and hoses at the same time.
Regards
Rex B

When i replaced the turbos on my car i took the subframe off, as there was no room to get into them otherwise. So i would not be surprised if you are quicker taking the engine out to get in at the exhaust manifold. Hopefully some one who has done a head gasket will be along shortly to tell us the actual situation.

It's engine out really, you can leave the gearbox in situ if you like
While your in there best change the belts,water pump, starter motor, knock sensor's and maybe the clutch assembly and rear oil seal..
As you don't want to go in there ever again!

I have had a think about this and it may be possible to remove the head with the exhaust manifold and turbo still attached.
Rex B

Thanks for the replies, I was wondering whether i would need to pull the engine out and it sounds like I might have to. I have ordered gaskets and a cambelt from Eurospares today, but dont yet know when to expect them as they're special order and not in stock. still that will give me a week or so to find somewhere to keep my other car whilst I sort this one out.
Thanks again for the replies.
Rgds, Mark

Hi Rex, I have considered that and think you might be correct; I spent almost 40 yrs as an aircraft engineer, primarily on combat aircraft so I am quite used to working in really tight spaces, so think that's my first choice option, I'll let you know how I get on when I actually start it.
Rgds, Mark

Anything is possible @frugalman and as very experienced Engineer you will be fine they just take time and care.
I'm also 40 years in the game as a motor engineer and changed the oil/water pump unit on my 4200 back in 2014 insitu when others said the engine had to come out.
Good Luck and keep us posted.

Beau had the heads off situ I believe

I had a blown head gasket on a 3200. It actually ran quite well still, just lots of white smoke. The engine was removed to take the head off and send it away. Also gave an easy opportunity to do the timing chains at the same time.
M

Are the timing chains and the guide avaialable again ?

MUC3200GT said:
Are the timing chains and the guide avaialable again ?
Click to expand...

Nope, I'm hoping the Maserati Classiche programme will go some ways to remedy that next year, amongst other parts.
M

I am sure if you give Mike at maserati Shed and he will say whether in situ is possible or engine out plus he will likely be able to help you with parts etc. If you don't know him I cannot speak highly enough of Mike. GL and sorry to hear of your misfortune with the head gasket

After a good solid two days work I managed to remove the nearside cylinder head today with the engine installed. the first day was spent removing components for access, primarily the radiator, oil coolers, inlet manifold, coolant manifold, associated pipes and electrical connectors, coil pack covers, plugs and cambox covers. I also removed the ancillaries belt and tensioner, the alternator and front cambelt covers. Today I removed the cambelt complete with tensioner, the front and rear cambox covers and the camshafts before removing the valve headers, cambox and finally the head. I had hoped to leave the exhaust manifold and turbo on the car, but couldn't get the two lower 12mm nuts off the number 6 exhaust port, access is really tight and they were seized solid. So I disconnected the turbo from the exhaust and tried sliding the head up the studs but the turbo led the inner wing. so I removed the two 8mm bolts holding the waste gate actuator which allowed me to lower it sufficiently for me to slide the head up the studs and off the the engine.

It wasn't an easy job, but with some perseverance and patience its definitely achievable. a couple of days cleaning and inspecting and then hopefully it will be ready for rebuilding.

Well done. Are you doing both heads?

It's a lot of work even for trained professionals and that's why you can get big bills.
Second doing both heads for a level playing field and optimum performance.
F

Well done. Do you have a photo of the gasket?

Hi all, thanks for the words of encouragement and advice, its always nice to get the views of other owners and enthusiasts. I am not sure yet whether to change the other head gasket; the compression test showed low compression on cylinders 7 & 8 and all the others were well up and similar, so I am pretty sure that the other head gasket is ok. This isn't my car, I am doing this as a favour for a friends son, he bought the car two years ago and about 3 weeks after he bought it the head gasket blew. He had a warranty from the garage but they refused to do anything about it so he had the car examined by an independent who confirmed that the head gasket had blown and also identified several other faults. Long story short; he engaged a lawyer to seek satisfaction and the garage went into administration claiming poverty, so he was left with a car he couldn't use and he couldn't afford the £8k bill to sort it out. My friend phoned me and asked if I could do anything help, so that's what I am doing. So far I have had the rear shocks refurbished by David Askew, The Throttle Body done by the Maserati Shed and a new pedal switch from Davey83. The owners not minted and I still need to sort out an ABS/ASR fault which I am hoping is corrosion on the phonic wheels, along with replacing a couple of brake pipes that are corroded. So at the moment my plan is to rebuild the nearside head and see how she runs, if she is ok I will concentrate on the other jobs, if not I will replace the offside head gasket then move onto the other jobs. I know that there is merit in doing both together, but there is also an age old saying " if it isn't broken, don't fix it" and in certain circumstances both are equally valid. The car has only done 68K, which for a 21 year old car is nothing, although cars that stand doing nothing are sometimes in worse condition than regularly used ones. I wasn't a big fan of Maserati's but its growing on me, it's well engineered and clearly built with good quality materials, if I can sort it out and drive it I might even get to like it!

This is one of my cars: 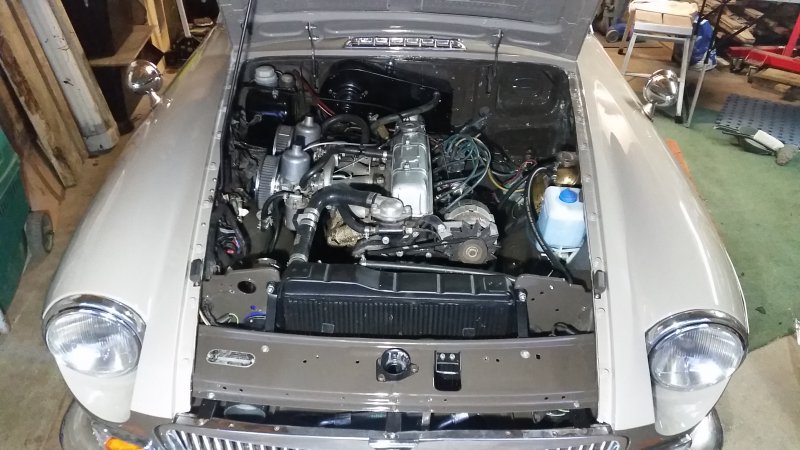