Another GT/QP, factory stickers left on the solinoid valves.

When you next have your cam covers done ask for them to be removed: 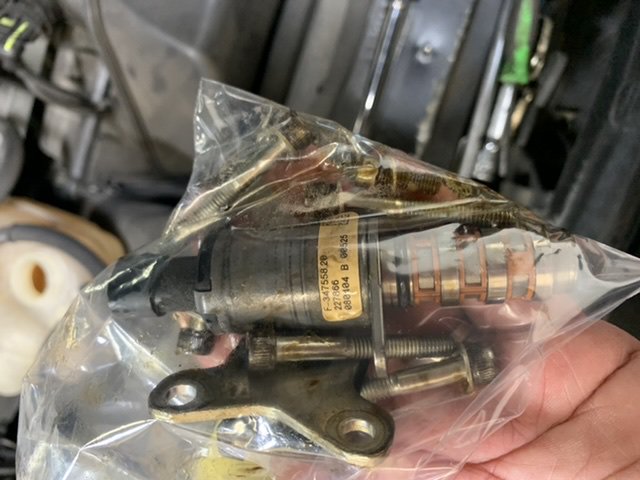 I'm guessing that this can't be just a Maserati thing though, there must be other manufacturers who do the same. Definitely something to be looking out for though

rs48635 said:
Agree about the age thing, which kept me sane in another incident. My 3200 was household third car and we only had parking for two on the drive, side by side. My freshly polished and serviced 3200 AC was parked two car lengths behind Mrs rs48635 truck - a Jeep Patriot. Got a tearful call at work one day. My wife reversed with gusto not looking behind. Hit NSF corner of the 3200 shifting it several feet back into the road.
Nobody more surprised than me as the words rolled off my tongue, "nobody hurt, it's just a car that can be fixed".
took 6 months and sh!t loads of aggro , but fixed it is.
Click to expand...

When you next have your cam covers done ask for them to be removed:

Too late, I have just had my cam cover done

How are you getting on. Any luck on finding an engine?

How are you getting on. Any luck on finding an engine?
Click to expand...

Yes indeed! Matt tracked one down and hopefully it'll be back on the road pretty soon! Thanks for asking.
P

Very sorry to hear.
However lockdown also seemed to ruin my QP 2005. A huge variety of engine fault errors - that finally resulted in a diagnosis of low compression in one cylinder. Just one though?
She barely made it up the ramp onto the BMS Salvage truck. A sorry sight indeed. Kinda broke my heart to see that beast barely crawl along.
78,000 miles - got £3000 for scrap.

Neither HR Owen (attempting the diagnosis - but how many costly attempts to get to the bottom of it?) - nor Nareman at Nuvola had ever seen an F136 engine fail like that.

I'll try to share the full story - at the moment trying to get some refund from HR Owen for charging me for work and parts - across multiple attempts that did not resolve the issues.
(£1000 for fuel injector rails?)
Why can't they just diagnose the issue accurately first go?

I am sure I've been remarkably unlucky. However I will steer clear of Masers until my pockets are much deeper.

To get back into V8 land - will probably be an XK-R.

Sorry to read that... but an XK-R is a wonderful thing!

this thread has been like a thriller, reading through looking to see what happens.
cliffhanger...no update for a while?
hope Matt and the gang got the Mas back on the road and wasn't too many limbs.

So, the 4.2 and 4.7 dry and wet sump engines are extremely durable.

You could even argue that the stickers were also not the fault of the engine.

We see regularly these cars now well up over 100k miles and still running sweetly and have yet to see a worn out example.

Get the stickers removed, don’t let anyone use sealant when doing cam overs etc and keep the oil and filter fresh and I don’t believe anyone will be replacing a tired engine.

Matt do you not put a little sealant across the front cover joins ?
Every manufacturer I have worked for we do.

so Matt is it all sorted, is the GT back on the road ?

philw696 said:
Matt do you not put a little sealant across the front cover joins ?
Every manufacturer I have worked for we do.
Click to expand...

We do…on the outer edge, my comment was more aimed at the trigger happy mechs

What sort of cost is a replacement engine?

I assume it's re-mortgage the house territory

both outgoing and incoming engines had circa 35k on them

both outgoing and incoming engines had circa 35k on them
Click to expand...

conaero said:
To date we have only seen one engine failure that was not caused by misuse/water and this was down to the variator solinoid stickers washing off and blocking an oil gallery (as pictured previously in this thread)

Neither HR Owen nor Nuvola could explain why.
Initial diagnostics were electronic. All fixed.
Then that car had been over-filled with oil. But by who? Both denied over-filling.
That was all cleaned up.
Then injector rails.
That was done.
Massive loss of compression in one cylinder. Just not worth resolving on a car that might be worth £9k - but not with the list of other faults that needed resolving.

Nareman at Nuvola had never seen anything like it before.

If it is massively overfilled with oil, the rotating components effectively whisk the oil into a froth, which has the counterintuitive effect of reducing oil pressure as the oil pump can’t pump air.

I don’t suppose they did a leak down test to identify the cause of low compression? Could be rings, head gasket or valves not sealing.

What Matt is saying is that they rarely fail, which seems to be backed up by what Nareman and HR Owen said. Doesn’t help you though, you seem to have been very unlucky.

Can't second how important doing a leak down test is and have mentioned it a few times on the forum.
When I brought my 456 my father told me I was mad not doing one on a V12 Ferrari.
I did say if it had been a 50's or 60's model I'd agree but you can really see how good an engine is.
You must log in or register to reply here.
Share:
Facebook Twitter Google+ Reddit Pinterest Tumblr WhatsApp Email Link